It is very important to us, to work everyday, respecting the fundamentals of Montessori education. Our values : care, respect and attention.
partage et bonne humeur ! 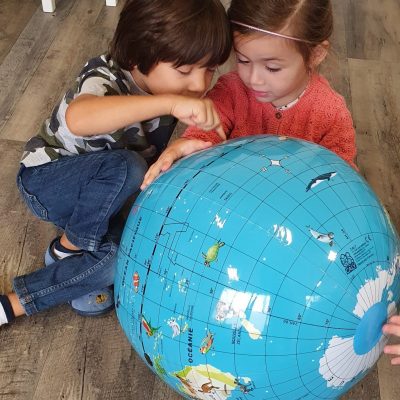 Maria Montessori based her pedagogy on what she defined as sensitive periods. Sensitive periods are “developmental windows of opportunity during which the child can learn specific concepts more easily and naturally than at any other time in their lives.”

During these periods, the child has special sensitivities which facilitate learning in particular fields. These easy and spontaneous learning abilities are fleeting.

Its manipulation allows children to discover the environment through their five senses, as well as to fix their attention and develop their ability to concentrate. Individual work of concentration leads to social awakening and peace. The child goes towards others with a calm mind.

THE ROLE OF THE EDUCATOR

Maria Montessori put forward “a new attitude of the educator” whose role is to reveal the potential within each child and help him to develop and fulfil himself through his work. The educator intervenes only if necessary. After careful observation of the child and the environment, the material is presented individually, the educator is a guide for the child.

THE STORY OF MARIA MONTESSORI AND HER PEDAGOGY

MARIA MONTESSORI (1870-1952) was the first female doctor in Italy, graduating in 1897. She completed her training with studies in philosophy and psychology and became professor of anthropology at the Royal University of Rome in 1904.

She campaigned throughout her life for the international recognition of children and their rights.

She discovered the different phases of a child's development, and in particular the importance of the “sensitive periods”. She set out to develop educational material for these children and achieved remarkable results with those who were seen by everyone as hopeless cases.

In fact, they performed better than other children attending traditional schools, which led her to believe that her methods could be successfully applied to all children.

In 1907, she opened the first Casa dei Bambini (Children's House) in San Lorenzo, a very disadvantaged suburb of Rome, in which she welcomed children aged 3 to 6 years.

- the development of intelligence through the work of the hand

- the existence of sensitive periods

- the need for repetition and order

- the development of interest through free choice

- the natural capacities of concentration and attention

- access to writing to reading before 6 years of age.

It was the beginning of worldwide recognition and the training of Montessori educators all over the globe, the publication of her books and of numerous conferences.

During her lifetime she travelled the world to transmit the fruits of her labour. She lived in India, the United States, England, France, Spain and finished her life in Holland.

In 1929, she founded the International Montessori Association in Amsterdam.

The Bilingual Montessori Nursery School in Boulogne is an independent private school.